Bologna Classic Tour The best of the city

The ideal tour if you’re visiting Bologna for the first time: the must-see landmarks of the historic center to be discovered on a walking itinerary, according to your needs and available time. 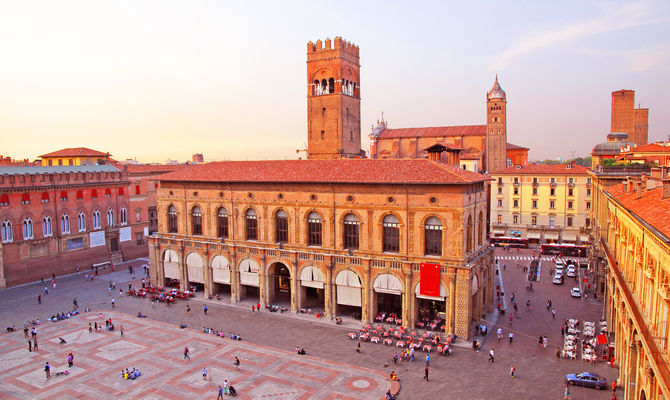 From Piazza Maggiore, the medieval heart of the city, we can observe the magnificent buildings that surround it: Palazzo d’Accursio, the city hall of Bologna, with its courtyards, the monumental staircase, the frescoes of Sala Farnese, the Torre dell’Orologio and the remains of the Roman forum in the spaces of the Library Sala Borsa; Palazzo Re Enzo, former prison of the son of Emperor Frederick II. And more: the Palazzo del Podestà, the first seat of the city government; Palazzo dei Notai, the late Gothic seat of one of the most prestigious medieval guilds and Palazzo dei Banchi, a scenographic building by Vignola that elegantly conceals the streets of the market.

Symbol of Bologna, the fountain of Neptune celebrates papal power adorned with precious sculptures by Giambologna. To watch over the square is the majestic Basilica of San Petronio, built by the Bolognese at the end of the fourteenth century and destined to become one of the largest churches in the world, although never finished: you can find many many masterpieces inside, including the frescoes of the Bolognini Chapel, and the seventeenth-century sundial of Cassini.

Walking under the elegant portico of the Pavaglione, you reach the Archiginnasio palace, the first seat of the University, adorned with thousands of heraldic coats of arms, and the Anatomical Theater, a seventeenth-century hall that housed anatomy lessons, celebrating the history of medicine through its incredible wooden decoration.

An immersion in the scents and colors of the famous Quadrilatero, the ancient area of the city market, allows us to reach the mysterious complex of the Seven Churches in Piazza di Santo Stefano.

Then it will be the turn of Piazza della Mercanzia and the splendid Loggia dei Mercanti: a few steps away stand the great protagonists, the Two Towers, the symbol of Bologna.

If you have more than half a day at your disposal, there are many splendid places that you can visit in Bologna. Here are some of them:

The Basilica of San Domenico, with the magnificent inlaid choir, the Ark of the Saint, a masterpiece of sculpture with interventions by the young Michelangelo, and the crucifix by Giunta Pisano.

The Church of Santa Maria della Vita, with the Lamentation over Dead Christ by Nicolò dell’Arca, and the Oratory of the Confraternita dei Battuti.

The Church of San Giacomo Maggiore, with the Bentivoglio Chapel, and the nearby Oratory of Santa Cecilia: the best of the Bolognese Renaissance.

The National Picture Gallery with the best of Bolognese painting from the 14th to the 18th century and a masterpiece by Raphael.

The International Museum of Music

The Museum of Palazzo Poggi

The Oratory of San Colombano, with its splendid collection of musical instruments and a very famous 17th century fresco cycle.

> Max number of participants: variable according to the chosen entrances

> Meeting place: to be agreed for each initerary

> Path length: variable for each itinerary

> Duration of the tour: starting from 2h30

> Entrance fees: variable cost according to the chosen entrances

Sorry, no posts matched your criteria.