Ferrara, the cradle of arts

The City of the Renaissance 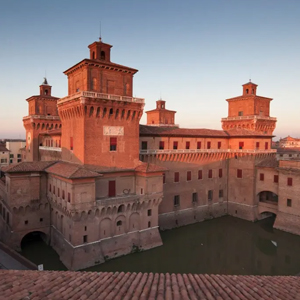 This half day walking tour of Ferrara will allow you to explore the most important landmarks of this beautiful city, dominated for three centuries by the Este family, one of the most refined courts in Europe. The tour starts at PALAZZO DEI DIAMANTI, a fabulous gem of the Renaissance architecture, whose facade is decorated with 8,500 white marble blocks carved to represent diamonds. Walking along the elegant CORSO ERCOLE I D’ESTE, we’ll reach the CASTELLO ESTENSE (visit from outside only), the imposing medieval fortress built in the heart of the city. From here we’ll quickly reach the medieval center with its PALAZZO DUCALE and the CATTEDRALE DI SAN GIORGIO (closed for repairs), with its Romanesque-Gothic façade. We will then stroll through the medieval district into the former JEWISH GHETTO and the evocative vaulted VIA DELLE VOLTE. 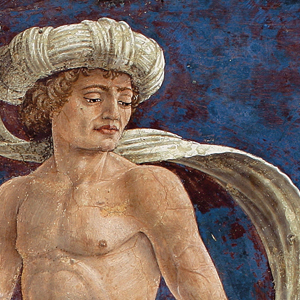 If you have more than a half-day to explore Ferrara, after a lunch break, we can complete the above tour with a visit to the Renaissance PALAZZO SCHIFANOIA, with its stunning SALONE DEI MESI, decorated by Francesco del Cossa and Ercole de’Roberti with allegorical frescoes. The MUSEO DELLA CATTEDRALE preserves the wonderful 13th century sculptures of the PORTA DEI MESI, ancient side door of the Cathedral, the remarkable organ panels by Cosmè Tura, leader of the fifteenth-century Ferrara school, and much more. Alternatively we can visit the PINACOTECA NAZIONALE (National Art Gallery) on the first floor of PALAZZO DEI DIAMANTI, which displays artworks from the 13th to the 19th century: Garofalo, Carpaccio, Guercino and many others; or explore the ceilings, frescoed with grottesche and mythological scenes, of the PALAZZINA MARFISA D’ESTE. 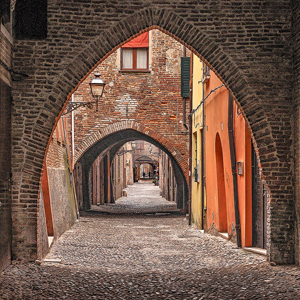 Ferrara’s hidden Jewish soul is an essential part of the city’s history. Its JEWISH GHETTO, along with that of Venice, is one of the largest and best preserved in Italy. We’ll explore its streets, courtyards and secret passageways around VIA MAZZINI, where the three main SYNAGOGUES in the city (German, Italian and Farnese) have always been located, in a large building that still houses the offices of the Jewish community, as well as the JEWISH MUSEUM. We’ll discover the JEWISH CEMETERY, in use since 1620, where the writer GIORGIO BASSANI rests. A an alternative, we’ll visit the National Museum of Italian Judaism and the Shoah (MEIS). Opened in 2017, this museum aims to share two thousand years of Italian Jewish history, through temporary exhibitions and occasions for intercultural dialogues. 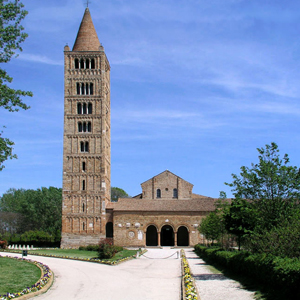 Pomposa Abbey, a Marvel of the Ancient World (2hrs)

This tour on the Adriatic coast near Ferrara will allow you to discover the POMPOSA ABBEY, one of the most important Benedictine monastery in northern Italy, famous for its rich Carolingian library and for the Romanesque buildings. The story of this abbey dates back to 874, by which time Pomposa was already a center of sophisticated Carolingian art. It played an important role in the culture of Italy thanks to the work of its scribe monks. In this abbey GUIDO D’AREZZO invented the modern musical notation in the early 11th century. Admire the Romanesque CHURCH OF SANTA MARIA, with its arcaded aisles and carpentry rafters. The interior contains a beautiful 12th-century mosaic inlaid stone pavement, and frescoes in the apse by Vitale da Bologna. The free-standing 48 m campanile is one of the finest surviving belltowers from the Romanesque period.